What do you do when you a have a lot of travelling to do and limited access to power? You ask your mates for a hand. In the Aussie tradition of mate ship, I reached out and was offered a top-up, but it didn’t work.

Tess was attending the Goomeri Off Grid Expo, and to save money I stayed with friends 100 km away. That’s OK, you think — charge up, drive there, drive back, she’s apples — it’s only 200 km. Not as simple as that. We were driving in cold weather into the rain at highway speeds, so we arrived at Goomeri with 180 km of range. Okay, you say, sharpening your pencil — if the car uses the same amount of charge getting back, it’s still okay. You will have a buffer of 50 km. However, I was expecting to allow people access to the car, and that uses charge. Being a little range anxious, I sought out a mate.

Paul drives a BYD T3 with vehicle-to-load tech, so we maneuvered the two vehicles close together and linked them up. What a great thing to be able to show the country people. These cars can share power! Sadly, it didn’t work. No top-up from the T3. Tess would not accept the charge. But hang on, we are at an off-grid expo. Surely there are generators.

Geoff from Westinghouse very kindly offered to bring over a generator and charge me up. It would make a great photo op for the trolls, I thought, charging a Tesla from a petrol generator. We got the genny going and plugged in the car. Once again, it did not work. Getting a little frustrated, we sought help from the collective hive mind of the Tesla Owners Club on Facebook.

Later that day, the answer came back: the generator has to be earthed! I shared this information with Geoff and he said no problem, easy fix. Except that he didn’t have the tools and parts with him. So, no top-up from the Westinghouse generator. We had a backup backup plan — one of locals said we could charge from their house on a 10-amp socket — but that would have meant spending the evening in Goomeri and driving back in the dark.

The story has a happy ending. Tess is not still sitting in the mud at the Goomeri campground. Due to the inclement weather, we kept the car closed and so used no energy during the day. Taking it steady, we arrived home with a small buffer and Tess had a good feed from a 15-amp socket at my friend’s home while we relaxed with beers. 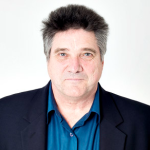 David Waterworth is a retired teacher who divides his time between looking after his grandchildren and trying to make sure they have a planet to live on. He owns 50 shares of Tesla [NASDAQ:TSLA].