While India is in the midst of a major modernization effort, many parts of the country remain rooted in tradition, whether that means the caste system or garbage pickup. In the ancient South India city of Pallavaram though, things have taken a decidedly sustainable turn, as the traditional garbage pushcarts are being replaced by electric garbage “trucks” that are in every way, better.

The Hindu reports that after testing one of the battery-powered garbage carts, the Pallavaram municipality decided to go ahead and purchase another 42 EVs in order to facilitate faster garbage pickup. Serving a community of over 6,000 households, the old litter pushcarts could only make, at most, a couple of rounds per day. But the new electric garbage buggies can pic up the trash six-times a day, keeping the ancient roads much cleaner than many residents may be used to.

Range anxiety doesn’t appear to be a problem with these litter pickers, and each one has been compartmentalized for biodegradable, non-degradable, and medical waste (which is mostly poop, as more than half of homes in India lack access to clean sanitary facilities). Drivers love the new glorified golf carts, which make even the Mahindra compact electric car look luxurious. But as they no longer have to pedal the trash-laden rickshaws up and down the narrow streets of the old city, these garbage collectors no longer go home with aching muscles and feet.

It also means fewer people can do the same job, which will ultimately save Pallavaram money. While garbage golf carts might pale in comparison to the full-size electric garbage trucks roaming Chicago’s streets, for this old city, it’s an important step into the 21st century. 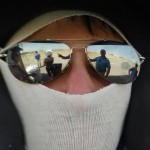 A writer and gearhead who loves all things automotive, from hybrids to HEMIs, Chris can be found wrenching or writing -- otherwise, he's running, because he's one of those crazy people who gets enjoyment from running insane distances.